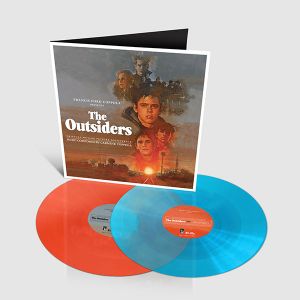 2LP
O.S.T.
SILVA SCREEN RECORDS (SV SILLP1428 01)
738572142872
Francis Ford Coppola’s 1983 teen gang movie based on S.E. Hinton’s novel featured a group of young actors destined for stardom that included Matt Dillon, Rob Lowe, Patrick Swayze, Emilio Estevez and Tom Cruise. The lush, epic Hollywood vintage style score to the film was written by Coppola’s father Carmine who wrote original music for all three Godfather films, winning an Academy Award for Part II, shared with Nino Rota. This re-mastered release is the most complete version of the soundtrack and contains much unreleased music from the film, most notably Stevie Wonder’s tender and beguiling ballad Stay Gold. The poster inlay contains an extensive essay on the music to the film based on interviews with those involved including Francis Ford Coppola.