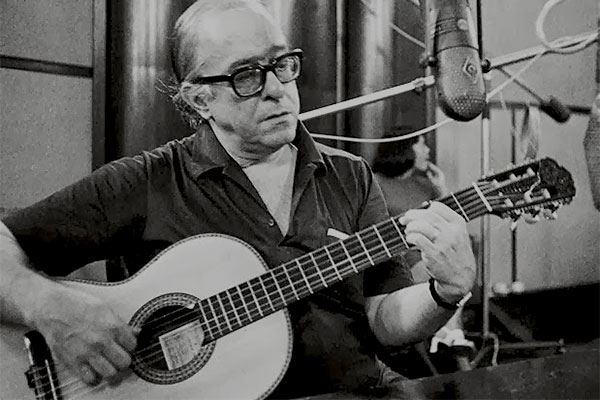 50th Anniversary of the Vinicius de Moraes album in Argentina
Discmedi publishes a special edition that includes the two albums of La Fusa plus 12 extra songs from a private meeting.
DiscMedi publishes a special edition for the 50th anniversary (from 1970 to 2020) of the recording of the emblematic Vinicius de Moraes albums in Argentina, which include recordings of unpublished songs and images of the artist along with other icons of Brazilian popular music (MPB ).
The new presentation consists of a double edition of the albums produced by Alfredo Radoszynski six months apart (July 1970 and January 1971), and popularly known as 'La Fusa', in which Vinicius was accompanied by the guitarist Toquinho and the voices of María Creuza and Maria Bethânia, respectively, in a recording studio with a guest audience.
Added to these classics by bossanova and MPB are twelve unreleased songs recorded at a private meeting in Buenos Aires in 1968, the year in which several Brazilian artists performed in the city. In addition to Vinicius, musicians such as Dorival Caymmi, the Quarteto me Cy and Oscar Castro Neves participated in the meeting; as well as local artists such as the Zupay Quartet, Astor Piazzolla and Amelita Baltar.
These unique recordings allow us to travel back to those years until we enter the intimacy of the meeting, sitting in that dining room amid laughter, conversations and some imperfections' typical of ambient sound.
In addition to the bonus tracks with home recordings, the edition includes unpublished images of the poet and composer along with different personalities who accompanied him on his visits to Argentina during that time.
The Vinicius de Moraes edition in Argentina will be available in 2CD and 3LP formats in the main record stores from September 4.
As a special pre-sale offer, all purchases made before September 4 will receive a free CD Como Dizier el poeta (1971), featuring Vinicius de Moraes, Marilia Medalla and Toquinho.